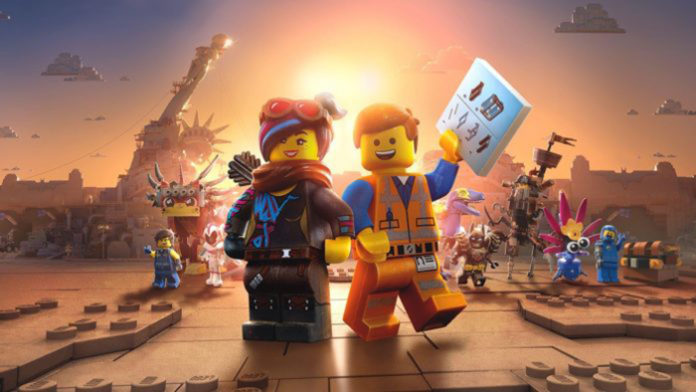 As the father of 7-year-old boy-and-girl twins, I have had a unique perspective on the natural differences between the two genders.

My son’s idea of fun is jumping off chairs and bouncing off walls. In his little mind, our house is a battlefield or a skyscraper or a football field — all of which require physical activity while he pretends to be a soldier or a superhero or a football player.

The newest animated film in theaters, The Lego Movie 2: The Second Part (PG), reflects this difference between genders. It’s a sequel to 2014’s The Lego Movie.

My daughter’s idea of fun, on the other hand, involves sitting in chairs, drawing or reading, while her crazy brother does his thing. She’s dreaming about princesses or unicorns or butterflies, and she’s often turning her thoughts into creative pictures that we hang on the refrigerator.

The newest animated film in theaters, The Lego Movie 2: The Second Part (PG), reflects this difference between genders. It’s a sequel to 2014’s The Lego Movie.

In the newest movie, Finn’s sister, Bianca, raids his creation and takes some of his characters to her room.

In that earlier movie, we experienced the imagination of Finn, a boy in the real world who is playing “make-believe” with his Legos. In the newest movie, his sister, Bianca, raids his creation and takes some of his characters to her room.

And — not surprisingly — her make-believe world is different from his. It includes a galactic romance and a galactic wedding. It has musical-style songs. It has glitter. In other words, it includes stuff that (for the most part) only a traditional girl would imagine.

This backstory is necessary for The Lego Movie 2 to make sense (if that’s possible). The film begins with our hero from the first Lego movie, Emmet Brickowski (played by Chris Pratt), encouraging the people of Bricksburg to fight off alien invaders, who proceed to destroy the town and kidnap a few citizens, too. Bricksburg is soon turned into a dystopian place known as Apocalypseburg, where — contrary to the popular tune — everything is not awesome. Citizens are despondent and depressed.

“Everything can still be awesome!” Emmet says.

But when his best friend Lucy (Elizabeth Banks) is kidnapped by the alien General Sweet Mayhem, he begins wondering if his outlook on life perhaps is too rosy. Emmet then builds a spaceship and races across the galaxy to save Lucy from Queen Watevra Wa’Nabi, who is on the verge of forcing Batman to marry her. She also is turning her subjects into zombies by making them listen to a song with the chorus, “This song is gonna get stuck inside your head.” (I told you it might be hard to follow.)

The Lego Movie 2 isn’t as enjoyable as its predecessor, but it nevertheless gives us a rare treat: a movie the whole family can enjoy. It contains no sexuality, no language and only minor violence.

It also has a few positive themes, including mercy, forgiveness and cooperation. (The brother and sister learn to play with one another.)

Finally, the lyrics to the movie’s theme song — Everything’s Not Awesome — more closely align with a biblical worldview. Instead of hearing the nonsensical lyric “everything you see or think or say is awesome,” we hear, “Everything’s not awesome; things can’t be awesome all of the time; it’s not realistic expectation; but that doesn’t mean we shouldn’t try; to make everything awesome.” That’s much better.