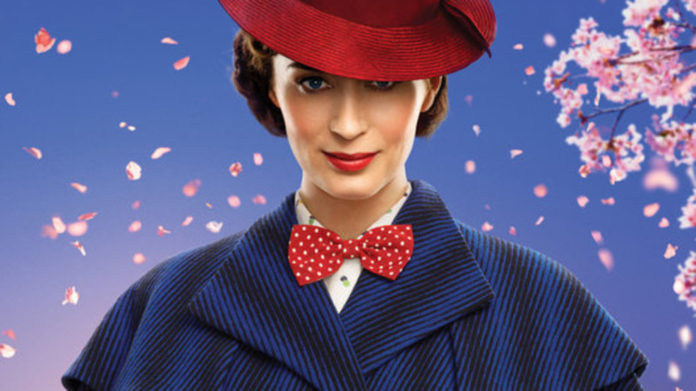 Not that long ago, I didn’t understand why the 1964 film Mary Poppins was such a hit. But then I had children. And then I finally got it.

Mary Poppins was popular because it reminded us of everything that is wonderful about childhood: imagination and innocence and fun.

The film is a sequel to the original film and follows Mary Poppins as she re-visits London’s Cherry Street Lane, where Michael and Jane Banks are all grown up.

It was popular because it urged us — in its own unique way — to enjoy life, to smile, and to laugh. It did this with memorable songs that quickly entered the modern lexicon and that are still sung today. (Surely you can hum A Spoon Full of Sugar, right?

I don’t know if the newest film in the franchise — Mary Poppins Returns (PG) — will win any Oscars, but I do know it contains nearly everything that made that first film great: playfulness and creativity and wonder. And, of course, catchy tunes.

The film is a sequel to the original film and follows Mary Poppins as she re-visits London’s Cherry Street Lane, where Michael and Jane Banks are all grown up and the joys of childhood have disappeared. That’s because Michael’s wife recently passed away. Additionally, he and his three children are facing eviction unless he can come up with the funds to pay off a loan.

But that’s OK. Mary Poppins will bring everyone a little cheer.

The film stars Emily Blunt (A Quiet Place) as Mary Poppins, Ben Whishaw (the voice of the bear in Paddington) as Michael Banks, and composer Lin-Manuel Miranda (who wrote the music for Moana) as the lamplighter, Jack. A dancing Dick Van Dyke returns, too, but in a different role. (I won’t spoil that one for you.)

Perhaps the music isn’t as good as the original — OK, it’s not — but it’s still enjoyable, and I walked away humming one or two tunes.

The most impressive element of Mary Poppins Returns, though, is its look and feel. It has the appearance of a slightly updated 1960s film. We see Mary Poppins and the children interact with cartoon characters. We watch her and the kids dive into the ocean and then float through the air. Even the way Mary Poppins gracefully falls from the sky — with her umbrella — appears 1960s-ish. Disney could have added CGI bells and whistles to every scene, but — thank goodness — it didn’t.

Mary Poppins Returns urges us to laugh more, to play more, to enjoy life more. It urges us to return to the wonders of childhood. It’s one of the best films of 2018.

It contains no coarse language, violence or sexuality.

Rated PG for some mild thematic elements and brief action.