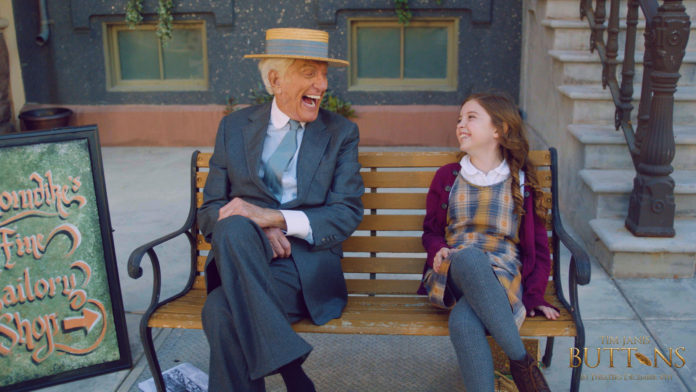 If Dick Van Dyke is singing and dancing in a movie, then you can guarantee I’m ready to watch it.

So it’s no surprise that I jumped at the chance to watch his latest film, Buttons, in which he plays a guardian angel who — yes — sings and dances. Incredibly, the 92-year-old Van Dyke hasn’t lost a step.

Buttons’ best moments include its multiple musical scores, which are impressive. Van Dyke dances like a man 40 years his junior, and his young dance partner — the young girl who plays Annabelle — is cute as a, well button.

Buttons tells the story of a young girl, Annabelle, who faces a series of tragedies but is cared for by a guardian angel played by Van Dyke (Mary Poppins). Angela Lansbury (Beauty and the Beast, 1991) plays a guardian angel who cares for another orphan, Emily. Eventually, their lives intersect.

The musical — which is in theaters for one day only, Dec. 8, at 12:55 p.m. local time — also stars Jane Seymour (Dr. Quinn, Medicine Woman) and Roma Downey (Touched by An Angel). Robert Redford (The Natural) and Kate Winslet (Sense and Sensibility) narrate it.

The film opens with Van Dyke placing a letter on the porch of a childless couple, who read it and discover that an orphan — Emily — is available for adoption. Thrilled, the couple prepare to visit the orphanage. We then discover that Emily is sick, although her guardian angel — Lansbury — is nursing her back to health by giving her hot chocolate and reading her a story about a girl named Annabelle.

The film isn’t good enough to be an instant classic, but it has plenty of enjoyable scenes. Buttons’ best moments include its multiple musical scores, which are impressive. Van Dyke dances like a man 40 years his junior, and his young dance partner — the young girl who plays Annabelle — is cute as a, well button. But when the characters aren’t singing, the story sometimes drags.

The movie’s primary theme — every person is given a guardian angel at birth — isn’t found in Scripture, even though the Bible does tells us that angels are real and even might be all around us (Matthew 1:20-21; Acts 8:26; Hebrews 1:14).

Still, Buttons is a feel-good, squeaky-clean movie that the whole family can enjoy together, and I walked away humming the tunes. We need more movies like it.

REVIEW: ‘Glass’ is a tale about evil superheroes. Huh?

February 22, 2019
You are going to send email to
Move Comment