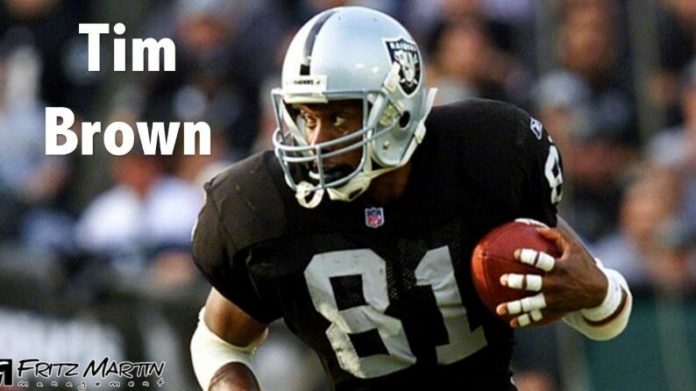 On the field and in life, legendary NFL Hall of Famer, Tim Brown has encountered many situations that have made him the man he is today. As Tim quickly achieved athletic success, he learned he had to work harder off the field to the live a life of honor and integrity that he wrote about in his book The Making of a Man.

Raised in a family of six, Tim remembers fondly much of his childhood spent attending church. He didn’t know it at the time, but the lessons from his church upbringing would later become his strongest foundation.

“When you grow up in church, you see the world from a different perspective. The older I got, I was exposed to other things and eventually got away from some of the values I had been taught,” Tim told SoCal Christian Voice. “But all along, I certainly held on to what I’d been taught, and it seemed I had constant reminders.”

Tim goes on to share one such incident when he was eighteen while swimming in the ocean in Hawaii.

“As I like to say, a thought was dropped in my spirit while I sat there on the beach. I heard as clear as day, ‘just like you got too far out in the water—you can get far away spiritually.’”

Not long after the foretelling beach experience, Tim’s excellence on the football team at Woodrow High school in Dallas, TX drew the attention of college recruiters and he was picked up by Notre Dame where he played from 1984-1987.

“But all along, I certainly held on to what I’d been taught in church, and it seemed I had constant reminders.”

When legendary coach Lou Holtz told Tim that he might be the best football player that Holtz had ever seen, Tim went on to make the College Football All-American Team twice and in 1987 was the first wide receiver to ever win the Heisman Trophy. Then in 1988, the Los Angeles Raiders used the sixth pick in the first round of the NFL Draft to select Tim.

As Tim’s success increased, so did the struggles off the field. He was faced with many temptations. Tim fathered a child out of wedlock with a girlfriend. Although he provided for the mother and child, he was unable to make the relationship work with his girlfriend. He continued sleeping around with other girls, which only increased the distance between him and God.

Even during these years, Tim said he was still reminded of the values he grew up with, but it was a four-year process before he made up his mind to turn his life over to God.

“There were several people that influenced me. But I had one encounter with a very famous person who got me alone and said, ‘young brother, I don’t know you. But I feel your spirit. I just want you to know that it’s not worth it. All the things you’re trying to do right now, it’s not worth it because I believe you know what you’ve been called to do.”

It was at this point in 1996 that God had Tim’s full attention. He made the decision to do what he knew he had been called to do all along: Be a true man of God.

“I realize that in a strange way, God was using football to help me bring guys to Christ.”

“He was not just calling me to know a little of the Bible and talk about it here and there. God was calling me to live it out on a day-to-day basis,” he said. “But now I had to go back to the NFL locker room.” Tim chuckled before he continues. “There was a lot of crazy stuff that came in there, and half of it, I may have brought in myself.”

Tim knew as he continued to play for the Raiders, he needed to be careful in his approach to sharing his life-transforming experience. It was a gradual process and there was some initial push-back in the beginning. But he stood firm in his call from God.

After a year-and-a-half, his teammates and friends began to see he was sincere and believed in how he was living. Slowly, he was approached by other players for advice on how he made the changes in his life.

“I realize that in a strange way, God was using football to help me bring guys to Christ. One thing in an NFL locker room, I couldn’t just go in there thumping my Bible. I needed to play good football. You play great football and people want to hang around you which opened the opportunity for me to witness to them.” And Tim Brown played great football. From 1993 to 2001, he never caught fewer than 76 passes in a season and recorded more than 1,000 yards receiving each year. He set NFL records for most consecutive seasons with at least 75 receptions (10), consecutive starts by a wide receiver (176), being the oldest player ever to score on special teams (35 years, 140 days), being the oldest player with 12 or more receptions in a single game (36 years, 97 days when he had 13 receptions for 144 yards against the Kansas City Chiefs). He also set the NFL record for most combined yards gained by a rookie (2,317 in 1988) and he shares the NFL record for the most consecutive seasons with at least 5 touchdown receptions (11).

And lastly, but certainly not least, he has been inducted into the College and Pro Football Halls of Fame and is the only receiver ever to win the Heisman Trophy.

Today, you will find Tim using his platform as a sports analyst, businessman, and inspirational speaker to teach men and boys principles and priorities for life. In his book The Making of a Man, he shares his struggles with life and God, his ultimate triumph, and the foundation of faith and family that even today helps him to be one of the most respected men in the world of sports. Happily married since 1997 and a father of four, Tim often has the opportunity to speak with kids. He encourages them to go to church and read the Bible—explaining it’s the only tool we can go to that will always be right.

When I asked Tim what message he would tell parents raising kids today, he shared this.

“Prayer is important. Going to church is important. But if you don’t get up off your knees and live this thing, you’re asking for an issue. My mom has lived out the Bible to the nth degree. I’m not saying my mom was perfect. But I never had an excuse. I could never say, ‘well when I was a kid, mama cursed me out, or mama got drunk. That never happened. And as a parent, that’s what you have to do (live out your faith) especially in the world we live in today.”

Tim shares that reading the Bible and praying daily are mandatory for spiritual growth, cautioning that otherwise the wares and tares of the world will drag you down. “When you hear a sermon, that shouldn’t be the first time you’ve heard those concepts. Going to church should build upon what you already know.”

Tim centers his life and his message to others around the principles taught in one of his favorite passages in Scripture, Psalm 37, in which he quoted several verses to me.

Trust in the Lord and do good. Then you will live safely in the land and prosper. Take delight in the Lord, and he will give you your heart’s desires. Commit everything you do to the Lord. Trust him, and he will help you. He will make your innocence radiate like the dawn, and the justice of your cause will shine like the noonday sun.
Psalm 37:3-6

“I realize that sometimes our rewards don’t come on this side of Heaven and we have to be good with that. Some might. And I pray they do. What we need to do is delight ourselves in the Lord and keep on moving.”

Wentz is Finding His Voice