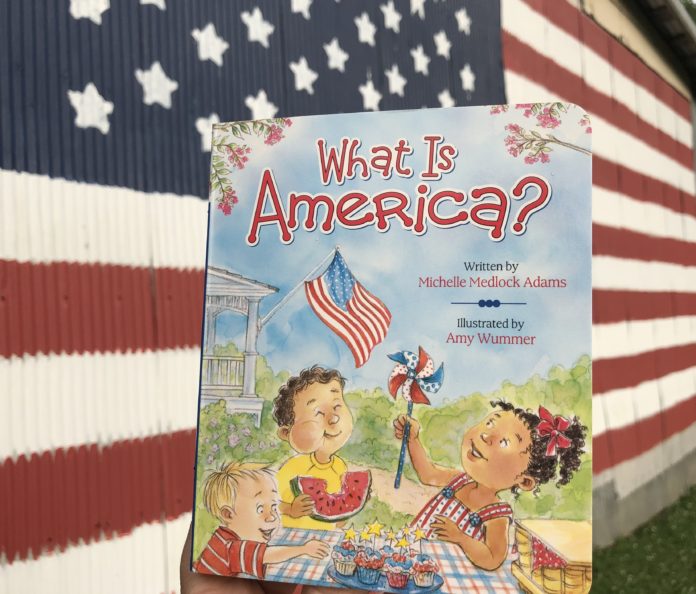 Want to make this Fourth of July even more special for the little ones? There’s a new children’s book to help them understand why we celebrate!

What Is America?, written by bestselling author, Michelle Medlock Adams, is the perfect gift to share with your junior loved ones. Told in fun kid-sized language, families can share this story to help make the celebration special, as they gather around to hear the story of our great nation.

Adams, who admittedly gets ‘teary-eyed’ even at a flag raising and lowering, said she wrote the book to convey the feelings she had upon watching a patriotic presentation at Disney’s Epcot.

“That was the whole purpose (for the book). I wanted children to experience that (same patriotism).” She explained. “This whole wave of emotions washed over me – I realized at that very moment how I wanted to write a book about America.”

“The American Adventure” is the show that held her spellbound with its presentation of the nation’s history. Adams said that her agent, who was in the group of writing professionals with her watching the show, saw a certain “look” in her eyes. He knew another book was about to be birthed.

A New Book in the Making

Our nation, throughout its story, has had its ups and downs and Adams included that in the book. “The (Epcot) presentation showed the good, the bad and the ugly.” She said it made an impression on her and helped shape the book.

She believes that disagreeing is also part of living here, but we can disagree without fighting. “Kids sometimes get it where adults don’t.” she commented. “There’s nothing wrong with someone if they don’t agree with you.”

What Is America? also emphasizes the fact that our nation is founded on faith in God.

“You can’t write a book about America and not write about God. Our country is founded on God.” She said.

It is a timeless retelling of our nation’s story that will never go out of style. It’s also a great book to use to begin new traditions that can be read each year as part of an Independence Day celebration, on Memorial and Veteran’s Day holidays and more. What better way to keep the story going and remind all of us why our country is so special?

In the pages of What Is America?, children learn about all the things that identify the United States – the pledge, the eagle, the flag, the faith that gave our nation its strong start – all these parts come together to tell this important story so future generations know.

Adams’ patriotism is also rooted in her childhood. “My father told me that I should pray for our leaders every night.” She said he set the example by praying every evening for the president, vice president, their state governor and all the country’s leaders.

Adams said she believes that What Is America? is a culmination of all that – both her childhood growing up in a home that respected our country and its leaders and ultimately raising her two daughters the same way.

“It’s for such a time as this.” She said, comparing the book’s journey to that of Queen Esther’s life in the Bible. The little board book’s purpose is to help perpetuate the important  ideals that our nation is founded on.

Keeping patriotism alive is very important to her. She even suggests a few ways that families can help patriotic traditions continue in their families.

“Always take time to be grateful.” She said. “Gratefulness and patriotism go hand in hand.”

Teaching children the pledge of allegiance and why we put our hand over our hearts when we recite the pledge are also important, she added. Family trips to visit historic places will also instill our country’s history in the little ones.

How It All Began

Adams began her writing journey early on, even before she knew she would someday be a writer. “I was a really early reader and read a lot. My dog and my books – they were my best friends.” She said. ”

She earned her journalism degree at Indiana University and initially became a newspaper reporter. From there, she began writing books, ultimately branching out into speaking, publishing and teaching at writer’s conferences across the country.

She now publishes three to four books a year – her total count of authored books now numbers over 90.

“Whatever you’re currently working on is always your favorite.” She said. “The first time I saw one of my ‘What Is …?’ books in Walmart, I was so excited!”

“Whether it’s the fiftieth or the first, it’s still as thrilling. If you ever lose those feelings of exhilaration, you’re probably done.” She said.

Polar Pop in hand, she seemingly leaps book deadlines in a single bound. This appears to be the source of her writing super powers. “I have to have something to get me going of the morning! Polar Pop is my super power for sure!”

What Is America? Is the latest in Adams’ “What Is ….?” series of children’s books that features titles about Christmas, Halloween, Easter.

You can find What Is America? in stores and online at Walmart, and at Amazon, Barnes And Noble and Christianbook.com.

Connect with Adams at michellemedlockadams.com