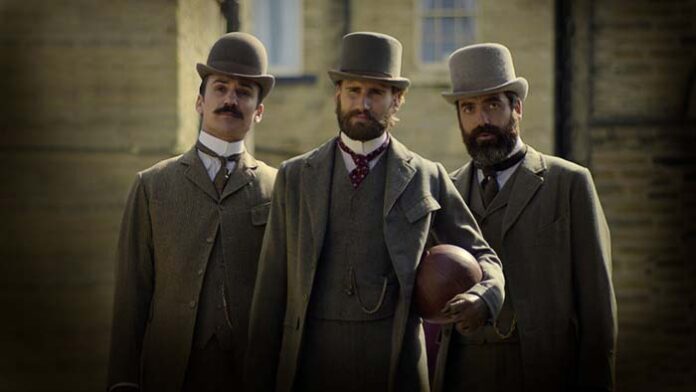 One of the best new series on Netflix spotlights a slice of little-known English history and a sport that rarely gets front-page coverage in the U.S.

Titled The English Game, the six-part dramatic series tells a riveting story of soccer’s transition in the late 1800s from a sport enjoyed only by England’s wealthy elite to one that was also played by hard-working blue-collar men.

It is based on a true story about soccer legend Fergus Suter, who in the series helps Blackburn become the first working-class team to win the prestigious FA Cup by defeating the Old Etonians, a team composed of high-class elites.

But even if you hate soccer, don’t worry. The English Game has an entertaining plot even non-sports fans will enjoy.

In the first episode, Suter is paid by a businessman to move to Darwen and play for the local soccer club, with the goal of winning the FA Cup title. Suter works in the local mill to hide the fact he was illegally paid to play. (At the time, soccer was limited to amateurs.)

Because Darwen’s soccer team is made up of millworkers, any strike by the workers also threatens the soccer season. That happens in Episode 1, but the strike is quickly resolved — and the local townspeople collect money to pay the team’s train fare for a cross-country game.

Eventually, Suter joins another team, Blackburn, after it agrees to pay him more. (The extra funds allow him to support his impoverished mother and siblings.)

The English Game is a story about a lot of things, including the English class system, the day-to-day struggle to survive, and the role of sports in society. At first, the two classes seem worlds apart — fighting in the streets and in the courtroom — but then Suter befriends Arthur Kinnaird, a wealthy player for the Old Estonians. They learn they have a lot in common, including a unique passion for the game others don’t share.

The series has a little bit of romance. It has a father-centric and family-focused plot. It even has a few moments of dialogue about Christianity that might be worth a discussion.

More importantly, it remains largely in family-friendly territory for adults, teens and maybe tweens. (Although you might need to skip one or two scenes.) The language is minimal and the romance relatively tame (kissing only; we learn of an out-of-wedlock birth).

If you enjoyed Downton Abbey and you like all things British, then you likely will enjoy The English Game, too.

The Big Show Show (Netflix) — A professional wrestler settles down with his wife and three children after retirement. The series stars real-life wrestler The Big Show and is rated TV-G, yet includes some TV-PG content (a handful of OMGs, for example). April 6.

God’s Not Dead (Netflix) — A college student stands up for Christ when his atheist professor criticizes Christianity. Rated PG for thematic material, brief violence and an accident scene. April 1.

Unplanned (Prime) — A Planned Parenthood worker transitions from pro-choice to pro-life after watching an abortion. It is rated R for disturbing/bloody images but deserved a PG-13 instead. It entered the platform in early April.

Dr. Seuss’ Horton Hears a Who (Hulu) — An elephant named Horton discovers a city of creatures on a speck of dust and risks his life to save them. Why? Because a “person’s a person, no matter how small.” It’s a great film with a pro-life message. Rated G. April 1.

Elephant (Disney Plus) — Two elephants, Shani and her son Jomo, venture across Africa. Meghan Markle narrates it. Elephant is part of the Disneynature series — a list of kid-friendly films that include spectacular footage. Rated G. April 3.

Dolphin Reef (Disney Plus) — Echo, a young Pacific bottlenose dolphin, learns to survive on his own. Natalie Portman narrates it. Rated G. April 3.

Michael Foust has covered the intersection of faith and entertainment for more than 15 years. He is the husband to Julie and the father of four young children.

REVIEW: Kids will enjoy ‘Aladdin’ — no matter what critics say