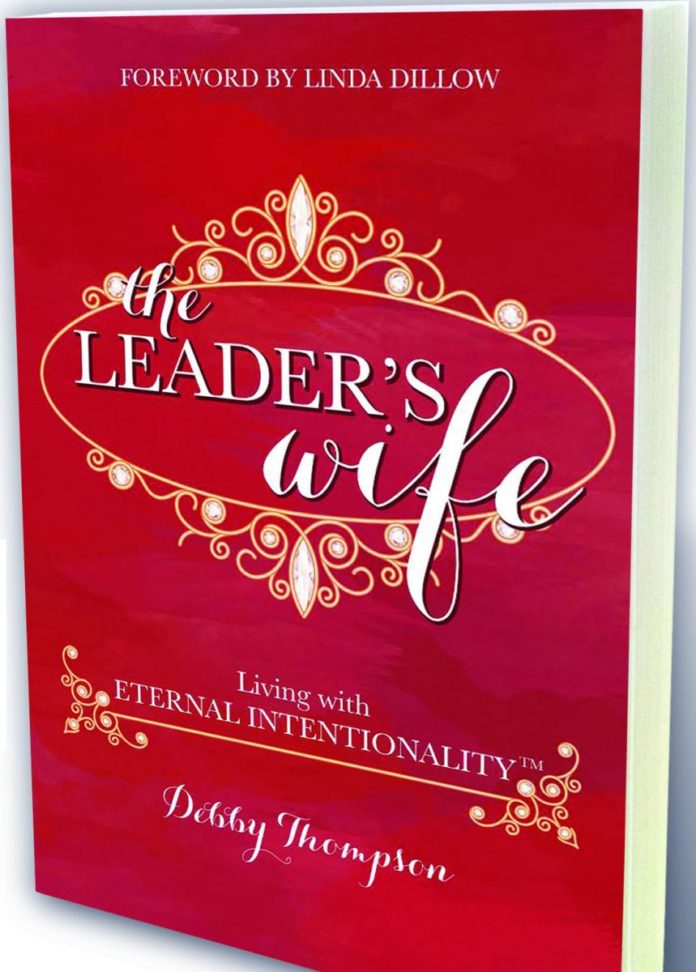 Being the wife of a Christian leader is not easy. Debby Thompson knows firsthand, and when she heard a fellow “leader’s spouse” once utter these words, she was inspired to share her personal story with others. As a result, she wrote The Leader’s Wife, Living with Eternal Intentionality, published earlier this year, which she also uses to communicate the wisdom she has learned from spouses of other Christian leaders around the country. Her book is labeled as encouragement to women “to pursue intimacy with Jesus, authenticity with others, a passion for their calling and a purpose for their influence.”

You are equipped to be the partner He created you
to be.

Debby and her husband, Larry, are no ordinary couple. When he proposed to her, she did not know the journey ahead, but his words provided a telling indication. Rather than a simple, “Will you marry me?” — he asked, “Will you go with me in helping to reach the world for Christ?” Their wedding ceremony closed with the hymn, I Have Decided to Follow Jesus…no turning back, no turning back.

They have now served in global missions with Campus Crusade for Christ International since 1974, and they spent a total of 33 years in missionary work in Eastern Europe.  The couple perhaps has faced more daunting challenges than most as in 1977, they left the U.S. and “flew into the great unknown” with their 17-month old child in their arms to live covertly behind the Iron Curtain in communist Poland. While there, she gave birth to two more children, and they witnessed dramatic social, political, and spiritual change, raising their family in four different countries with four different languages and four different cultures. (Editor’s note: You can read about a special Thanksgiving they celebrated in Poland HERE.)

While Debby points out the life of a leader’s spouse is an “invigorating, stimulating experience,” she also notes that it comes with its own set of pitfalls. A unique calling with unique challenges, this position requires you to share your husband with large numbers of people. Loneliness is a factor along with gossip, criticism, and people using you to try to get messages to your husband. There are financial challenges, opposition, long hours, monster schedules, and the urge to try to protect your spouse and fight his battles for him. Indeed, the spiritual battles upon a leader’s family who is following God’s will are more intense than others. The Leader’s Wife deals with all of these hurdles and additionally focuses on:

A leader’s wife needs courage, perseverance, and resilience. Debby has gained some valuable wisdom over the years from other godly women, books, seminars, etc. But her most significant source of help has come from the Lord Himself, especially during those times when the enemy tried to get her to quit, such as the time she tried to persuade Larry to leave Eastern Europe during a political and economic crisis in communist Warsaw. But “you are equipped to be the partner He created you to be,” Debby noted.

In her book, she provides four categories of growth and discusses the importance of finding your own strong identity in Christ, and she offers three “life-changing” principles to help make this happen. When Satan attacks you with pangs of insecurity, she provides some scriptures to arm you for the counterattack and to help guard and protect against “identity theft.” “A battle rages for your marriage — arm yourselves with the Word of God,” she advised.

Debby also includes personal stories about the wives of great leaders, both historic and current, such as Katherine Von Bora, the wife of Martin Luther; Elisabeth Elliot, who ministered to the Auca Indians after they killed her missionary husband; and Ruth Graham, wife to the legendary Rev. Billy Graham.

She discusses the importance of having a communication covenant with your husband and tells how she and Larry became workaholics after they turned into empty nesters, causing additional issues to overcome.

Debby even includes an entire chapter about sex, and how the Bible serves as a “marvelous manual” on the topic. She talks about the associated myths and offers suggestions for a “sanctified, sizzling, sex life” for Christian married couples from newlywed newness through the empty nest nostalgia.

The final chapter discusses powerful promises for the leader’s wife from God’s word. I won’t give any more of the book away as you need to read it for yourself. But be assured that her pearls of wisdom can be incorporated into the lives and marriages of any Christian spouse, whether your husband is a leader or not.

Now living in Cincinnati, Debby serves on the Global Leadership Council of Athletes in Action International, the sports ministry of Campus Crusade for Christ International.  An active grandmother of six, she is also a sought-after speaker, writer, and mentor for women around the world.