One Tri Cities woman is taking her own advice and has become involved in her community – she’s even written a book to help others get involved in the community.

“My main heart is to see the kingdom (of heaven) come to earth.” Becky Haas recently reflected while talking about her experiences and the book that came as a result.

Haas was uniquely positioned to get involved when she took a job with an East Tennessee Police Department to help develop a new grant-funded crime reduction project several years ago.  That program took off and she was able to see it through to completion. With that, several other innovative ideas to help solve issues in the community have been implemented and more continue to be developed.

I feel like we live in a time unlike any other.

“Your City is Waiting on You” was born from her desire to help encourage and guide others who want to become involved as well. It’s a book that outlines not just the opportunities waiting on people in their own communities, but it also provides the guidelines on how to take the first steps toward helping out. 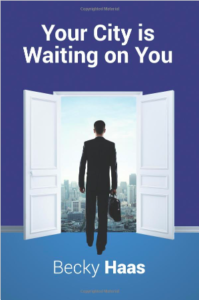 “Understand that God has picked you to live in this generation” she encourages in chapter one. What follows is an explanation about what she believes is Isaiah’s prophecy about this current generation and how Christians factor into the future of the nation. The mission fields in our own cities and towns are ready, she writes.

Haas said the book happened as a result of her husband’s strong and continued encouragement over a period of time to put her thoughts and experiences into print – it was that and God’s prompting that helped her start putting her thoughts down on paper. In September 2016, God reminded her about the book. When she sat down to write the words flowed, and over the next year, she used time at night and on weekends to finish it.

“God downloaded the chapters in my mind,” she said. Those words will challenge anyone who takes the time to read them,  step out and find a place to serve.

“God will use ordinary people to do extraordinary things.” Haas believes God works through people who make themselves available.

“This book could serve as a roadmap to people,” she recently reflected on her thoughts about how her book can influence individuals. The title alone suggests it’s time for people to go out and get to work in towns and cities across the country.

“Your City is Waiting on You” opens with Haas detailing how she ended up working at her local police department as director of an eight hundred thousand dollar grant-funded crime reduction project. It then goes on to talk about the God story each of us is living, in the first chapter titled Jesus Came to Seek and to Save.

In the chapter titled Open Doors, she explains that there are many opportunities for anyone who wants to get involved and help make a difference in their community.  Haas said she saw it firsthand as she went out into her own community of Johnson City, TN.

“I was enlightened to how many wide-open doors are available for impacting the lives of thousands of folks in your community.” She writes.

The book has already garnered her invitations to speak as decision makers and leaders in other towns and states find out about it. She feels the book can continue to help bring about change.

“Your City is Waiting on You” is available on Amazon.com You can contact Becky Haas at bhaascityreach@gmail.com

November 21, 2018
You are going to send email to
Move Comment