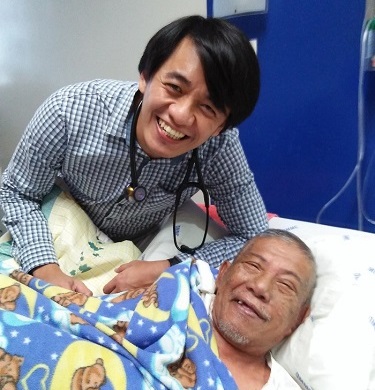 My father, Tatay, as my siblings call him, is a diabetic for 14 years, dependent on insulin. Early this year, his nephrologist, Dr. Nickson Austria, strongly advised him to undergo hemodialysis treatment since his kidneys are not fully functional, a most common complication for people with diabetes.

Tatay was against hemodialysis. At 75, he didn’t want any tubes getting into his body just to live. He worried that the cost of the treatments would just leave us, his four children, bankrupt in the end. We all heard of stories of families who sold all their properties and went into debt to pay for hemodialysis, but still having the patient die in the end. Tatay didn’t want that.

We didn’t know what to do except respect his decision. We couldn’t counter his reasoning for not seeking treatments. Even if we pleaded with him to reconsider, his mind was already set. I admit that I didn’t want Tatay to start dialysis because he didn’t want it, his body was frail already, and I was worried about the financial burden the treatments would put on our shoulders in the future.

Everyday, we watched as his body slowly deteriorated. Most days, he was sleeping because of body pains. His feet got swollen, then his legs, his stomach, until the swelling reached his head. It was the waste and excess water having nowhere else to go in the body. His face was like a blown up football, as if it was stung by a giant bee. His eyes were squinting because of the swelling, he looked like a different person. Because of the change in his appearance, he refrained from having visitors in the house. The bedroom became his cave; he rarely went outside.

It was difficult for us to watch him in pain and struggle with every movement. We prayed for the Lord to take him in his sleep so the pain would end, that was his prayer, too. My family was already discussing about memorial services. We were waiting for him to die. Sounds morbid, but when you see your loved one suffer for so long, death seems a better option.

Then came that fateful day in February.

While outside the house sitting in his rocking chair, Tatay told me that he wanted to go to the doctor because it was hard for him to breathe. Before leaving the house, he told my mother that he just liked to get oxygenated at the hospital, and not hemodialysis. Members of the family were clear on that. My brother immediately brought him to the emergency room. My youngest sister went straight to the hospital later.

I was worried sick as I was left behind to stay at my parents’ house. A neighbor told me that for patients like my father, the shortness of breath, as if drowning, is a sign that death is near. I felt that my father wouldn’t come back alive from the hospital.

While in the emergency room, Tatay decided to finally undergo dialysis later that night. An X-ray showed that his lungs were filled with water and the only way to remove the water was through dialysis.

It was a long night as I waited for news about Tatay’s condition. I couldn’t sleep. Several thoughts ran through my head. What if he couldn’t make it? What if his body couldn’t take the dialysis? What if he succumbs to a heart attack? So many what if scenarios.

By morning, my sister told me that Tatay survived his first hemodialysis. He was able to sit on his bed in the Intensive Care Unit (ICU) and eat his food without assistance. I was so relieved! I praised God for his gift of life. All of us were over the moon with Tatay’s win.

However, our celebration was short lived. Another bomb came our way.

A second hemodialysis was scheduled for Tatay later that day. I was in the hospital and Dr. Austria told me of what to expect. He said the chances of Tatay surviving the treatment were low since he was an elderly and a long-time diabetic. A cardiologist was also monitoring father’s heart to make sure it could handle another hemodialysis session. Dr. Austria assured me that he would do everything to get Tatay well.

The family had a meeting on what to do following that grave information. Should we continue with the treatment? What should we do to lessen his pains? My mother cried, wanting Tatay’s ordeal to be over and done with. She said Tatay has been dealing with his diabetes for years and she didn’t want to see Tatay suffer further.

We waited still, hoping for the best and at the same time, preparing ourselves for the worst.

This is Tatay’s second life.

After a couple of days, Tatay was transferred from the ICU to a regular hospital room. I asked him if his opinion on doctors and medical treatments changed after what happened to him. Even as a non-religious person, he admitted that his experience proved to him that nobody can presume God’s plans in our lives.

“Many are the plans in a person’s heart, but it is the Lord’s purpose that prevails.” -Proverbs 19:21

He was already expecting to die, wanting it, praying for it, but then God has another plan for his life. Misconceptions about hemodialysis created a wrong idea in his head. He thought that dialysis was the cause of a patient’s death when in reality, it actually extends a patient’s life.

Tatay is now having hemodialysis twice a week. His body got back to its normal weight and stature. He was able to walk without aid and talk clearly, without gasping for air mid-sentence. In March, Tatay walked my other brother down the aisle, a milestone which we thought would never happen.

Truly, we can’t get ahead of the Lord’s plans for us. My family was already preparing for death, when what God really wanted was life. I wanted God to take away the suffering and He showed me grace.

Through the Editor’s Window: Memories of Mules in the Mountains